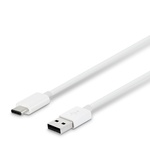 You may have noticed that the new models in the MacBook Pro lineup all feature the new USB-C connector. What is this connector and why do we need it?

USB-C is not an Apple product, but was developed by the USB Implementers Forum, of which Apple is a member, and is a group of more than 700 companies that have developed and certified the new standard. Apple’s MagSafe and Lightning connectors were limited to their own products but the USB-C connector has a much wider implementation and has been included in some computer systems since early 2015.

But what about the connector itself? Recent model computers are much slimmer, and the older style connectors are simply too large for current design. The speed of USB-C is twice that of USB 3.0, but it can also handle simultaneous power and video signals so it can support  a variety of signals like HDMI. Future implementations are also expected to carry audio. Similar to the Lightning and MagSafe connector, there is no way to get a wrong connection as the plug works either way up. And USB-C cables are the same at both ends which means you can use them with many different devices.

USB-C also supports Thunderbolt 3 which has a bandwidth of 40Gbps. What does that mean? Well, with a single cable you can theoretically power, and supply video signal to, two 4K video displays. The new 15” MacBook Pro has four of these connectors and each will support video, data or power.

Just as the original USB specification replaced Apple’s old Apple Desktop Bus (ADB) and SCSI connectors, along with PS/2 and serial ports on PC’s, the USB-C connector is the new high-performance all-in-one connector.

There are many adapters available that will help you connect existing peripherals to a new MacBook Pro and there are more adapters coming. We can help you work out what you need!