MY ONE YEAR FITBIT ANNIVERSARY!

Last March I decided to pick up a Fitbit Surge to help me track my walking and running activity.  Mac Outpost had already been carrying Fitbit products for about a year, so it seemed like a good idea to take the plunge!

I was initially unsure how easily I would be able to integrate a fitness tracker into my daily routine.  It took me about 2 weeks to get used to wearing a “watch” again, but now I hardly notice it on my wrist!  Overall, my first impression of my Fitbit was that the hardware and software integrated perfectly with my iPhone right from the beginning!  After my quick setup it just “worked”!

The primary activities I track are running and walking.  With my surge, I’m able to track my exercise with a high level of detail.  My kilometers, steps, calories burned, pace and heart rate are all captured automatically and uploaded to my iPhone (which does NOT need to be present during my activity).  All of those stats are impressive on their own, but the biggest WOW factor for me is the GPS Mapping feature that the Fitbit Surge includes.  After my walk or run I’m able to pull up a map of my activity complete with loads of interesting stats, lap times, distances, etc.

I was recently in New York City for March break — I’ve included a screenshot of my run in Central Park! 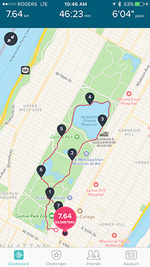 Over the past year I’ve also been able to monitor details like my heart rate changes (lowering over time fortunately) and average pace (also improving)!  These sorts of long term stats are easy to monitor using the included iPhone-based software.  The Surge also allows me to track my sleeping habits, which could use improvement.

It may be a cliche, but I would say that the Fitbit Surge has changed my life — for the better!  I’m in better physical shape, and I’m getting very useful information about my general health when I’d only be guessing about it before.  If you are considering adopting a walking or running exercise routine I’d enthusiastically recommend the Fitbit Surge!