48 HOURS WITH MY FITBIT SURGE! 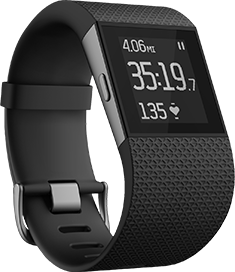 When winter turns to Spring, people invariably turn their thoughts to the great outdoors.  After a long, hard winter of overeating and sedentary living those thoughts can often expand to include exercise and fitness.  I must admit that I was a bit skeptical about committing to wear a fitness device.  Since the advent of the smartphone, many of us have stopped wearing watches.  I am no exception to this way of thinking.

The Fitbit Surge fits comfortably on your wrist (it comes in a small and large band option). I was able to set it up and “sync” it to my iPhone in about 10 minutes.  Ever since, it has automatically forwarded my heartrate, steps taken and calories burned directly to my phone (and also to the Fitbit dashboard in my web browser).  Seamless!

The biggest feature I was originally interested in was the built-in GPS run-tracking feature.  As a test, I started a “run” with the GPS on.  After I finished, the Fitbit Surge found my phone at home and synced up the GPS data so I could “see” a map of my run with interval times!  Just what I’ve been looking for!  I’ll be using the feature quite a bit as the weather improves…

One feature I have yet to try is sleep monitoring (I’ve been taking off the Fitbit Surge as I head to bed).  As I grow more accustomed to the Surge I may try wearing it to bed so I can gather data about my sleeping habits, see how many times a night I wake up, etc.

Recharging is accomplished with the included USB charging cable.  It usually takes about 2 hours for a full recharge, and that should easily last throughout the day. I’ve read that runners that use the GPS monitoring feature should be able to get up to 5 hours (a slow marathon) of use while recording that run before exhausting the available power.  The chances are that YOU would run out of energy before the Fitbit ever would!

I’ve added a link to a great (and much more detailed) review of the Fitbit Surge.  Stop into Outpost2 at the White Oaks Mall to pick up yours today!